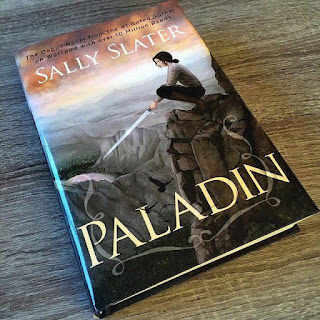 Summary (from goodreads):
Brash, cocky, and unbeatable with a sword (well, almost), Sam of Haywood is the most promising Paladin trainee in the kingdom of Thule… and knows it. The only problem is that Sam is really Lady Samantha, daughter of the seventeenth Duke of Haywood, and if her father has his way, she’ll be marrying a Paladin, not becoming one.
But Sam has never held much interest in playing damsel-in-distress, and so she rescues herself from a lifetime of boredom and matrimonial drudgery. Disguised as a boy, Sam leaves home behind to fight demons-—the most dangerous monsters in Thule—-alongside the kingdom’s elite warriors. Pity that Tristan Lyons, the Paladin assigned to train her, is none other than the hero of her childhood. He hasn’t recognized her–yet–but if he does, he’ll take away her sword and send her packing.
Sam is not the only trainee hiding secrets: Braeden is a half-demon with a dark past that might be unforgivable. Whether he can be trusted is anyone’s guess, including his.
As demons wreak havoc across the land, rebellion stirs in the West, led by a rival faction of warriors.
A war between men is coming, and Sam must pick a side. Will saving the kingdom cost her life–or just her heart?

My Review: Alright. This is going to be a long one. I have many things to say. Good things because this book is INCREDIBLE.
World-building? Check.
Strong female lead? Check.
Hot guy with awesome hair? Love interest that isn't actually a love interest? Swords and knives and daggers? Check, check, check.
I am a voracious reader. I devour books day and night, sometimes reading into the early hours of the morning. I've read tons and tons of books. But this book...this book is one of the best YA novels I've ever read. Three cheers for Sally Slater!
She has done a wonderful job.
Okay, now that I've seriously praised this magnificent book, let's talk plot. As the summary above kindly states, Paladin is about a boy...who is actually a girl. At first, when I picked up the book, I thought, "Uh-huh. Another Mulan-ish book." Nope, it's so much better than that!
Sam is the daughter of a duke with dreams. She doesn't want to be cooped up at home, watching the babies and cleaning up their puke. She wants to be out there in the world, fighting the demons that exist in her kingdom Thule. She wants to be a Paladin, a demon fighter.
However, all Paladins are male. There is no such thing as a female Paladin because in this kingdom, females are inferior to men. Sexists.
So Sam, being the strong, awesome gal she is, decides that she wants to become a Paladin. She dresses up like a boy and heads off to train to become a Paladin. The one thing I love about her throughout the book is how strong she is. How determined she is. This determination is what sees her through the many dangers and obstacles she faces. There are reasons for why she ultimately makes the decision but you'll have to read the book to find out!
Paladin school is where we meet the other main characters in the book. Braeden is a half-demon who is filled with the need for revenge against the demons. Tristan Lyons is a Paladin and he becomes the trainer of both Sam and Braeden.
Okay, these boys are hot. Not only are their bodies amazing in the book but they have such good hearts. Braeden is a total sweetheart and underneath the scary appearance, he's a marshmallow. ^_^ As for Tristan, he is kind and just and half the time I was reading, I just wanted to hug them hard.
Anyways, Sam and Braeden become formidable warriors just like Tristan. When they are sent on a mission by their commander to scout out a rival demon fighting group, things begin to change. Tensions, feelings and suspicions that Sam is not who she says she is.

However, I have to say I am totally Team Braeden. He's kickass from the very start and he doesn't need Tristan to teach him any new things about fighting. Sam and him become very good friends.
Basically, this book is just a whirlwind of adventure and action, sprinkled with bits of romance just enough to make me hug the nearest pillow. I'm not going to tell you which love interest she ends up with but let's just say, they make a really cute couple. :) After I finished the book, I scrolled back to their little moments and reread them. Three times.
The only thing I wanted more of was more into Sam's early life. Like I've said before, I'm not going to tell you the reasons she left to be a Paladin but I would've liked it if there were some more in depth descriptions and lingering moments when she remembered things from her past.
There are not many books that really give me a good vibe. Ones that make me smile and laugh as I read and feel myself fighting alongside the main character. The fact that this book exists is impressive. The fact that this is Sally's FIRST book? That's a miracle.
Paladin is a wonderful book to get lost in and I really recommend it. Thanks for giving us a world to escape to, Sally.

You can buy this book on Amazon!

Sally Slater is a writer and the author of Paladin, a fantasy adventure novel that has garnered over 10.5 million reads on the social networking platform for readers and writers, Wattpad. Her writing has also appeared in The Huffington Post and The Sydney Morning Herald's Daily News.When she's not writing, Sally is a public relations professional at a strategic communications and advisory firm in New York City. She also dabbles in CrossFit and firmly believes that women in both real life and fiction should be strong.
Posted by Serena Cai at 6:21 PM